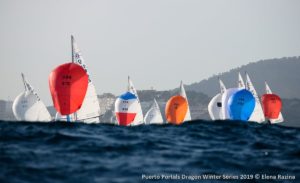 Despite another tremendous turnout for a winter series, it was with great disappointment that the weather did not play its part last weekend, as only two races were sailed.  After a beautiful week of sunshine and light afternoon breezes the first race day (Friday 17th) saw the 45 boat fleet enjoy two cracking races in 8 to 12 kts of breeze from around 250 degrees. Everyone revelled in the Mediterranean sun and crystal blue waters of the beautiful Palma bay. 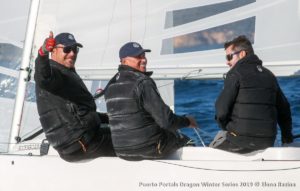 Recording a 2nd and a 3rd, Dmitry Samokhin, Andrey Kirilyuk & Kasper Harsberg, maintained their domination of this Puerto Portals Winter Series…. In the first race the wind shifted quite considerably to the left, which obviously benefited those boats who started towards the pin end. One of those boats was GER 118 owned by Michael Schmidt but helmed by Fancisco Andrade on this occasion, who seized the initiative and continued on to win race 1. RUS finished 2nd and GER 16 Dirk Pramann 3rd. 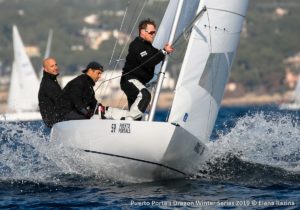 For the first time in a Dragon race a “Vertical Top Mark” was implemented, to stop Port Tack boats illegally crashing in at the windward mark. This Vertical “additional” Mark is place approximately 4 boat lengths directly downwind of Mark 1. Boats must leave this mark (black) to port, then continue until the Starboard lay line, or until they find suitable space to conduct a safe, legal manoeuvre.  The feedback from the sailors was all positive, so Puerto Portals will continue this experiment in the future.

Anything that helps to avoid blatant and unnecessary collisions at the top mark, causing endless amount of damage, has to be a good thing in my book….  So let’s see how it develops over this 2020 season…. 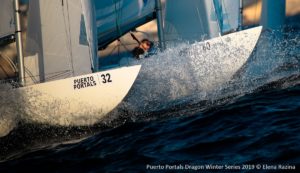 In the second race of the day it was ITA 77 “Bunker Prince” who made a big jump on the fleet from the left side of the race course to lead at the top mark. Despite the very best efforts from Pedro Andrade helming GER 1170 and Dmitry in RUS 76, the Italian boat could not be caught. So Evgenii Braslavets, Sergey Pugachev & Sergey Timokhov took the win, GER 1170 2nd & RUS 76 3rd.

Also having a good first day in the winter series was RUS 27 “Annapurna” who recorded a 4th and 6th in this extremely competitive fleet. 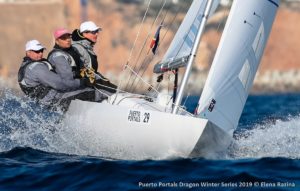 Right behind on 11pts after the first day was GER 16 Dirk Pramann and SWE 401 Martin Palsson who were obviously looking forward, as we all were, to a full weekend of racing.  But alas, on Saturday there was no wind and on Sunday, conditions were adjudged too risky to sail as there were Gales warnings issued all around Palma….

So despite only two races sailed, I’m sure everyone and maybe a few more will return to Puerto Portals in February for the Valentines weekend, the 3rd Winter Series…..  Could there be 50 boats next time ? Let’s wait and see…….

p.s. THANKS AGAIN “ELENA RAZINA” FOR THE PHOTO’S!