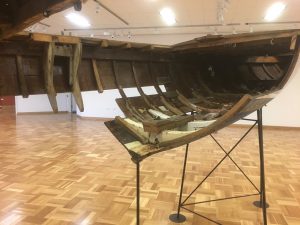 She has had a distinguished history; She won a World Title in Europe before representing Germany in the Melbourne Olympics in 1956. From Victoria she navigated west via Adelaide finally to the Swan River at RFBYC.

She crossed my bows earlier this year having come to the end of her sailing life. As a collector of historic sailing boats it was thought I might have an interest in her. I did.

However she was 30ft of timber, metal, lead and fittings and I had no place to put her and keep her intact nor could I contemplate a restoration. She was destined for the tip or, being crafted from Honduran mahogany and teak, exotic firewood.

I was given a short window of time to salvage the significant sections and consolidate them into a kit of what could in the future be considered for an artwork.

Wooden craft, wooden dinghies, dinghies and sailing craft in general are central to my being as an artist, the hardware of the river and ocean seem attracted to me as I am to them.

Cut up she was, backpackers burnt out my chainsaw and blunted the power saw blade, but they stuck to my rudimentary side of beef instructions to cut off the head and tail and keep long fillets of planking, deck and cockpit. We had some nice bits to think about and work with. Maybe sometime or never.

The offer to participate in Even Keel (an exhibition showcasing ship wrecks and yachting glories), 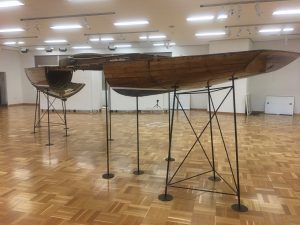 pricked up my ears and in the best traditions of reconstructing, the notion of the found object (not the Duchampian ready made, thanks Cornelia)

Gustel started to reform herself and allow the reassembly of components to reveal her former power and beauty. She invoked thoughts of forensic examination of aircraft disasters or more locally the story of Otto the museum’s blue whale.

She is a cultural artefact with a history, “the entropic forces of time have created a distinct material presence that is an index of her life as an instrument and a possession” Iwona Blazwick

She is open to inspection; she is accurately poised to represent her sheer line.

The varnished exterior and the scrubbed teak contrasts with the marks of time evident on the inside. Over time her ribs have nearly all been sistered, the furry rot of electrolysis can easily be detected, as can the effects of rust in her keel bolts.

The craft of her constructors transcends the effects of time and the environmental forces of wind, salt water and competitive racing.

The tapering of the planks, the precise joinery, the plugging of the fixings, the control of form and volume all are there to witness and to contemplate.

She has stories to tell, memories to provoke and the imagination to conjure.

To get up close and inside such a classic craft is a privileged perspective.

The craft of putting her back together has been aided by the careful skills of my collaborator Matt Dickmann. Getting her lined up, making cleats to amalgamate each section, to achieve an authentic sheer line all is a credit to Matt.

It goes with out saying that forests paid a price and she led a privileged life. Issues of sustainability, conservation and the environment are questions we would raise now. In 1955 those voices were few and perhaps the legacy we can pay is to respect, recognise and value this Dragon remnant.

With Thanks to John Low last owner of Gustel X1