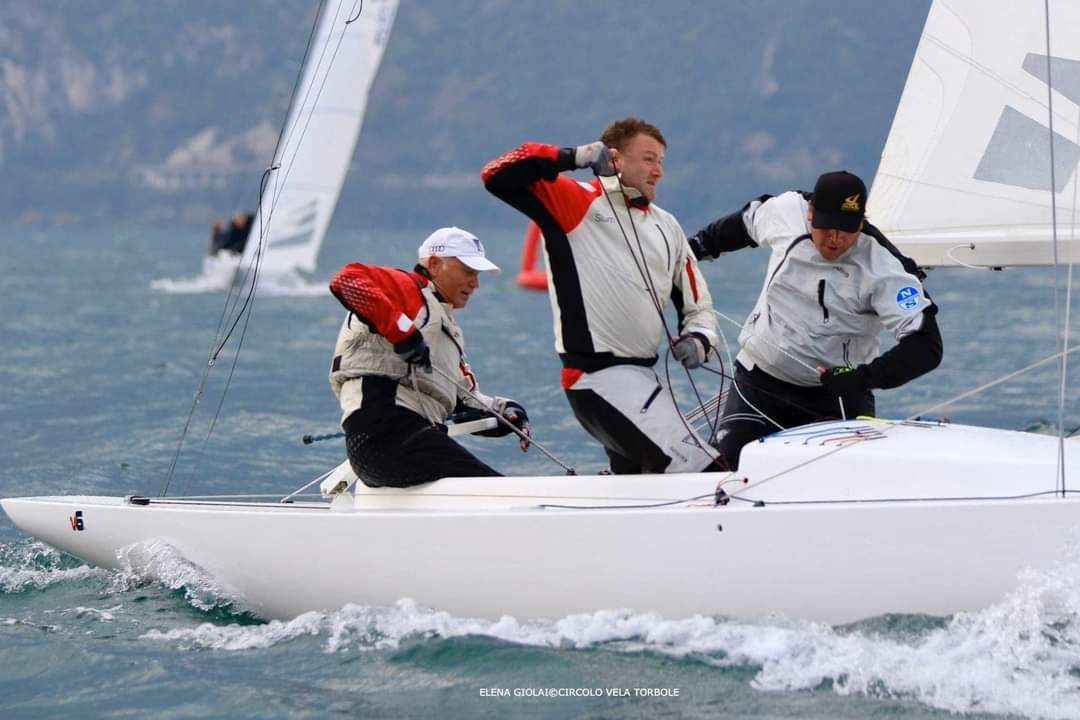 26 Dragons competed in the 17th Hans-Detmar Wagner Cup held over Oct 1st-3rd in Torbole’ on Lake Garda. This was an excellent turn-out considering travel restrictions and self quarantine requirements (for some Countries) in place during the on going Covid pandemic. 5 Italian boats joined the 18 German, 1 Swiss, 1 Danish and Russian team to see who would lift this coveted trophy, inspired by German Legend Vincie Hoesch back in 2004, on this picturesque Italian Lake. Unfortunately the weather Gods did not provide the usual thermal winds, typically the morning “Peler” northerly wind and the afternoon “Ora” from the south. 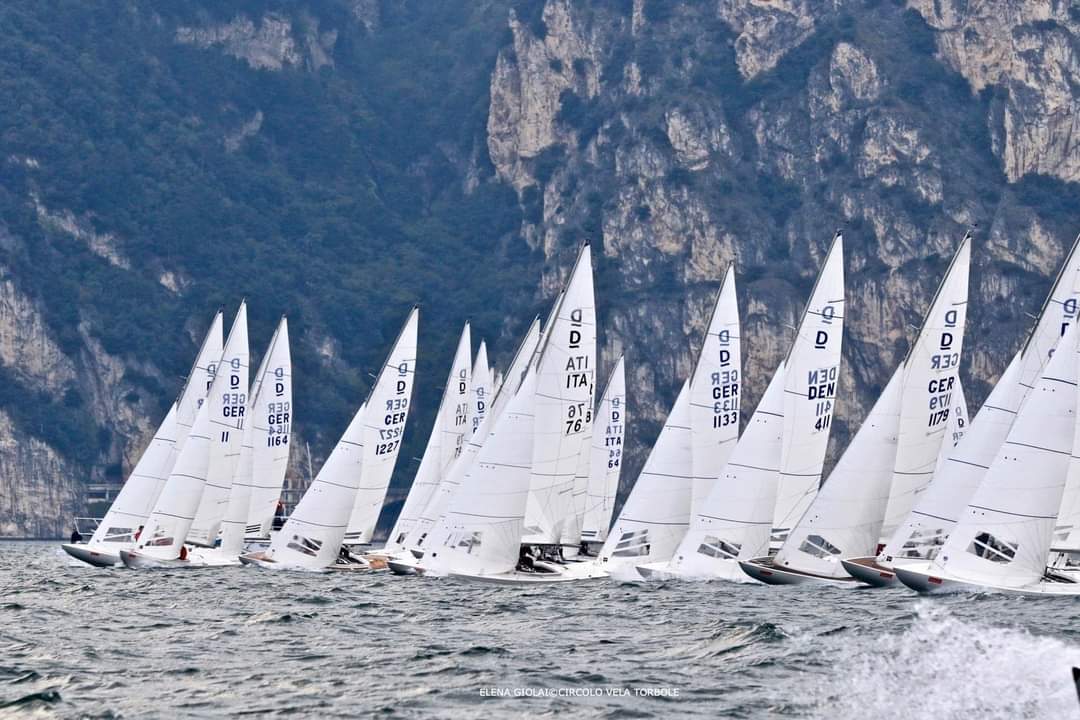 On the opening day the skies were grey and the forecast was for a deluge of rain in the coming days, so it was important to squeeze in as many races as possible. Race 1 saw top Lady Helm Nicola Friesen with Vincie Hoesch & Kilain Weise in GER 10 take an early lead closely followed by SUI 296 Justus Kniffka (one of our IDA Officers) in 2nd place and DEN 411 Jorgen Schonherr in 3rd. Justus told me “We were training here 3 weeks ago sailing in Shorts & T Shirts in the most perfect conditions, with the normal morning and afternoon winds. However, it was different this weekend as we only had one sailing day with wind from around 185 degrees. It mostly paid to start right and go right with perhaps an exception in race 2”.  Well those tactics certainly worked for Justus and his team as they managed to stay close to Nicola and ahead of Jorgen in race 1. At the finish it was GER 10 (GER 1217 Spinnaker) 1st, SUI 296 2nd and DEN 411 3rd. 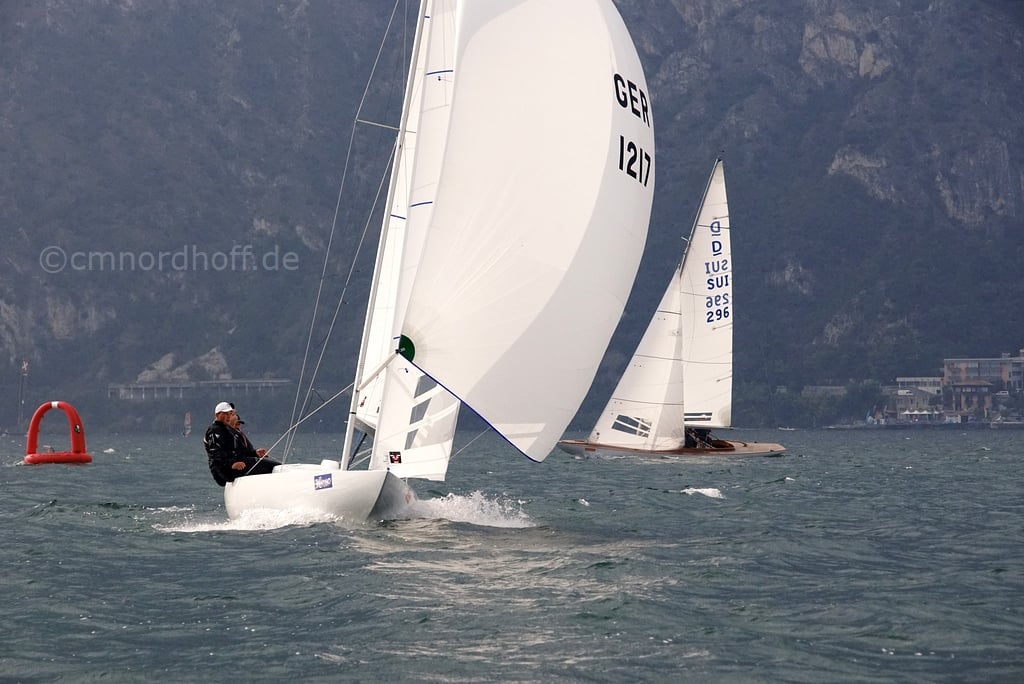 In race 2 it was DEN 411 “African Queen” helmed by 4 times Gold Cup winner Jorgen Schonherr, crewed by Christian Videbaek & Joost Houweling who again showed good speed as they battled early on with GER 62 Stephan Link and again with GER 10 Nicola Friesen. Vincent Hoesch told me “After winning race 1 we were in a good position again in race 2 just to leeward of Stephan Link, but as we approached the top mark lay line the new GPS mark moved up wind a few metres which meant we could not make the mark”. It appears that the GPS marks sometime drift a little downwind, which is then corrected every 20 seconds or so, this obviously can cause problems if you are on a very tight lay line. Vincie continued “Stephan was able to make the mark as they were slightly over-stood but we could not make it and could not tack! In the end we lost many positions and finished 19th, a complete disaster”. Never mind Vincie, I’m sure as we use and learn more about the GPS marks they will become more consistent and you will be right back at the front of the fleet, as you normally are 🙂

As the race continued it was Jorgen Schonherr who dominated to finish ahead of Stephan Link in 2nd and GER 16 “Ingrid” helmed by Dirk Pramann, crewed by Markus Koy & Freddy Loof  who finished 3rd. 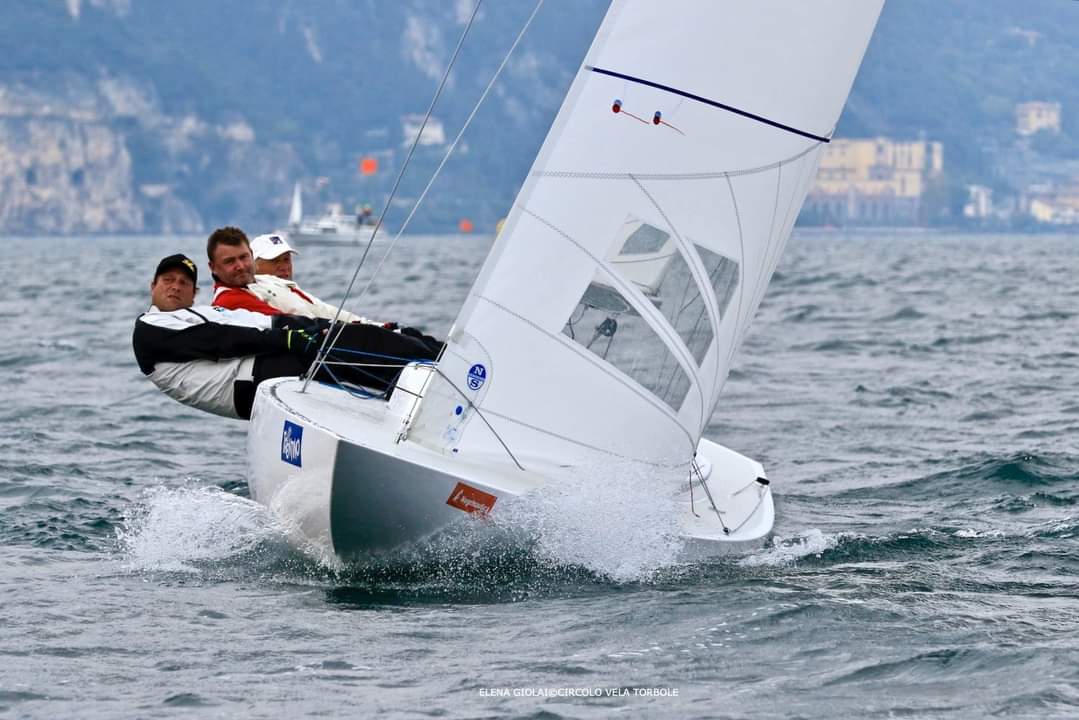 Race 3 saw GER 62 “Desert Holly” helmed by Stephan Link, crewed by Frank Butzman & Michi Lipp once again up at the front of the fleet, this time it was GER 16 Dirk Pramann who was their closest rival and GER 1227 Wolfgang Bays in hot pursuit. What no team could have foreseen was that this 3rd race would in fact be the final race of the series due to no wind on day 2 and too much wind and unstable conditions on day 3. Such a pity for all 26 teams that made to effort to travel to this normally reliable venue. Nevertheless GER 62 managed to hold the lead, GER 16 was 2nd and GER 1227 held on to 3rd place. More importantly DEN 411 finished in 4th position so as the teams made their way back to the Circolo Vela Torbole’ clubhouse the overall scores were DEN 411 8pts (counting 3,1,4), GER 62 10pts (7,2,1) and GER 16 10pts (5,3,2). 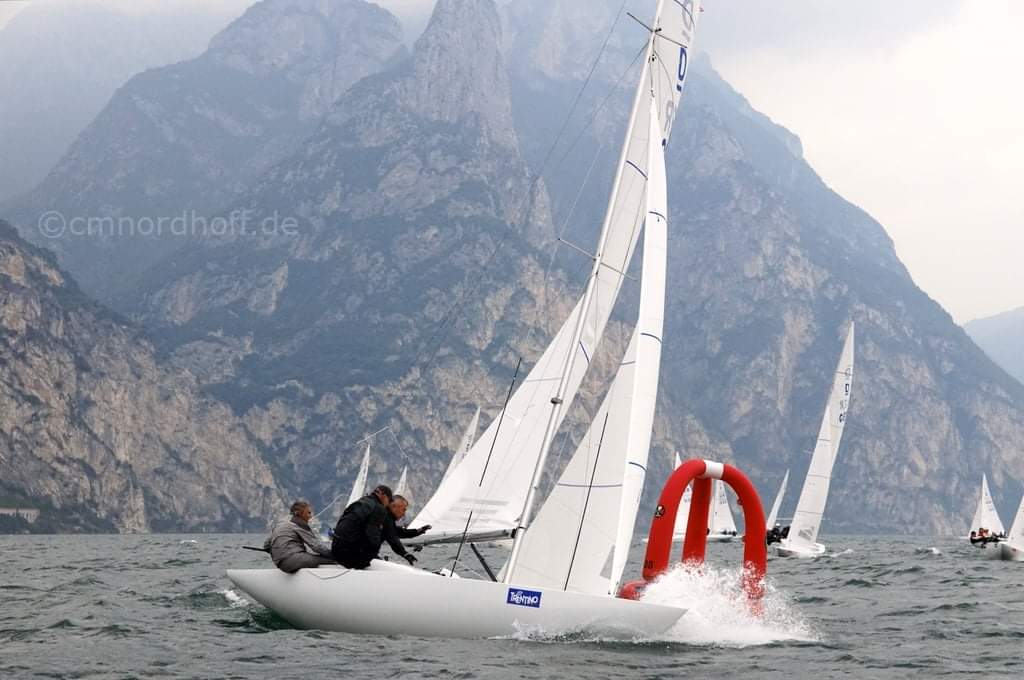 With the rain pouring down in Torbole’ over the Friday and Saturday there was simply no more racing so the scores at the clubhouse after the 3 races on the opening day decided the championship and DEN 411 were crowned champions. 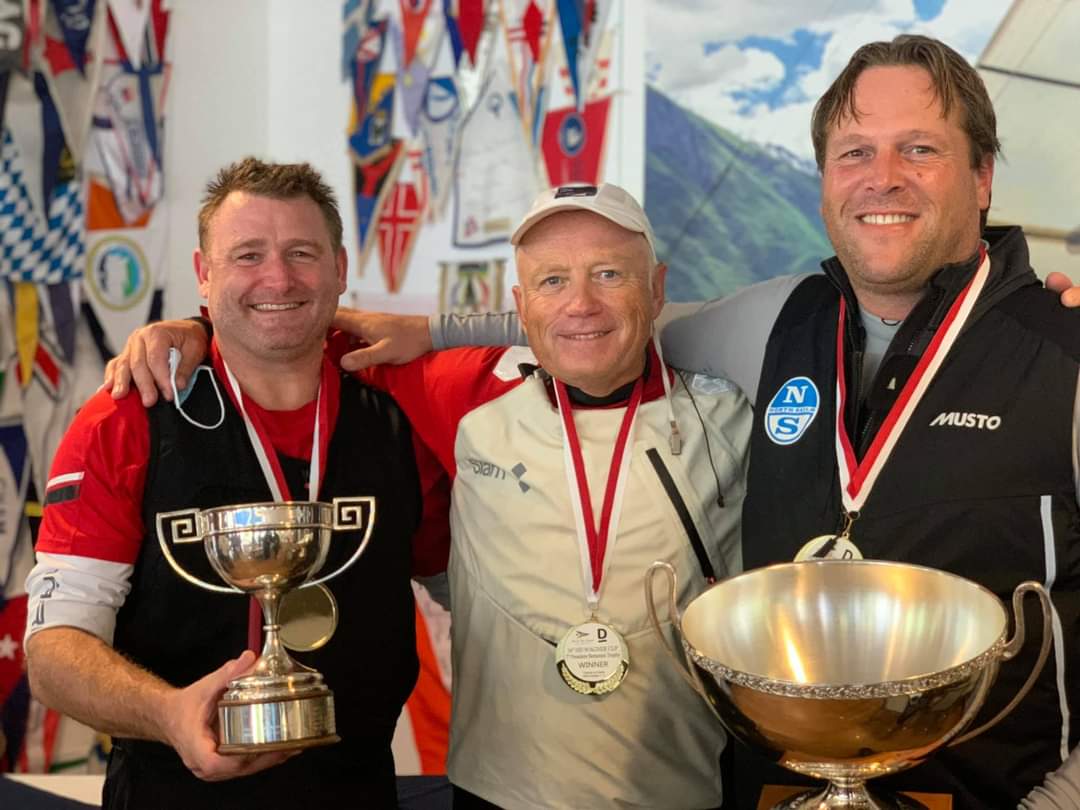 Jorgen told me after the event “It was great to race the Dragon Internationally again in these difficult Covid times. We had 6 great days at Torbole’ including some training days with team Pramann before the event. Yes, it was a shame we could not race the last 2 days but it gave us the opportunity to catch up with all old Dragon friends. In this part of the lake it is difficult to decide if the advantage is to go the cliffs on the right or to the left, but we were conservative starting in the middle of the line giving us good options to choose a side after a few minutes into the race. With good boat speed we were able to not lose too much to the boats that went extreme to the favoured corners. It was great tight racing and now I stay at Lake Garda preparing for the Star Europeans!”  Great advice on how to succeed on this lake ‘Champ’, many congratulations once again to you, Christian and Joost and the very best of luck for the Star event. You are a true legend and a great ambassador for the Dragon class. 🙂 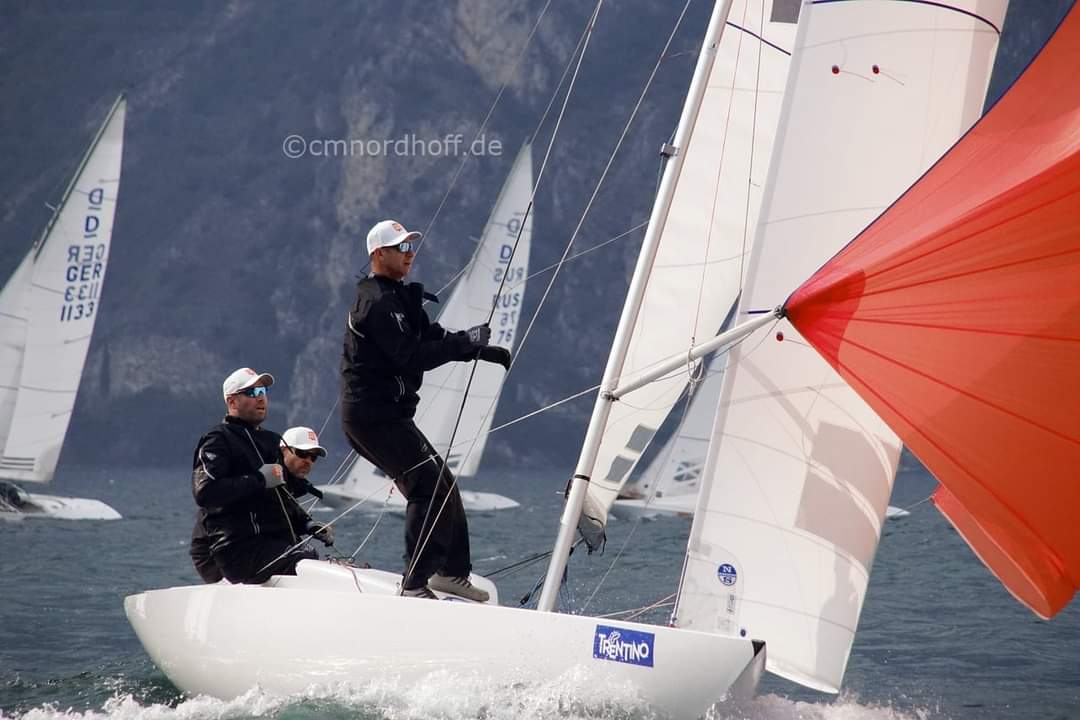 Meanwhile this was also the 4th Italian Class Championship event to see who would be the overall Italian Champion of 2020.  The top Italian team in Torbole’ was ITA 12 “Galatea II” helmed by Giuseppe La Scala, crewed by Roberto Benedetti and Simone Dondelli who finished a creditable 7th place. 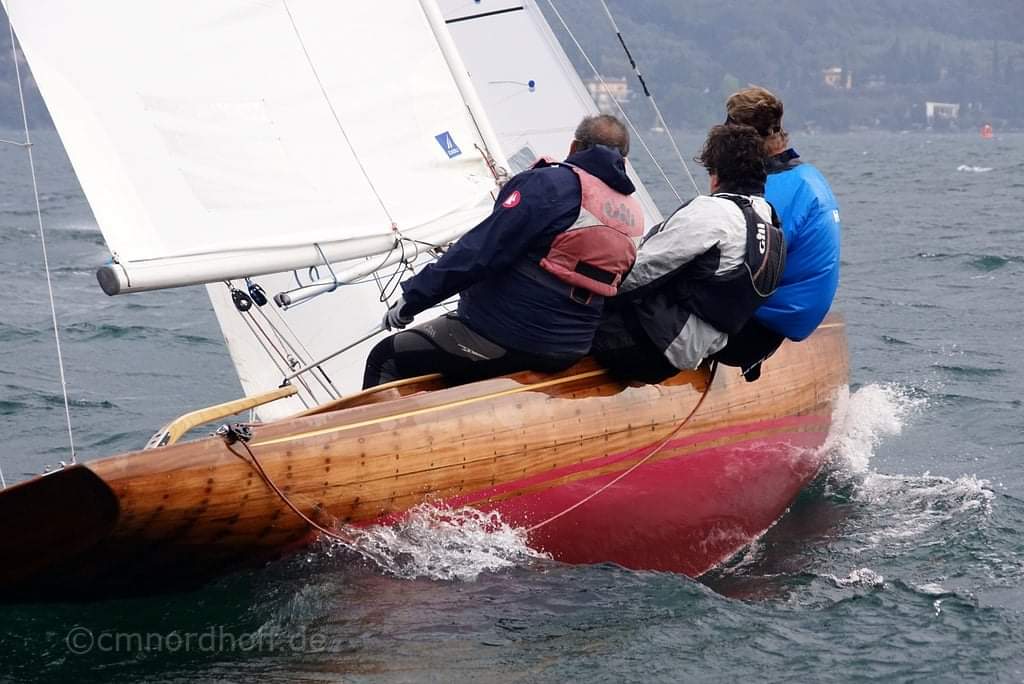 This beautiful wooden boat participated in the Helsinki Olympic Games of 1952, finishing in 9th position. How nice it is to see a part of history still competing at the highest level. However, the top Italian helmsman overall after the 4 events was Giuseppe Duca, with Salvatore Eulisse and Vittorio Zaoli. 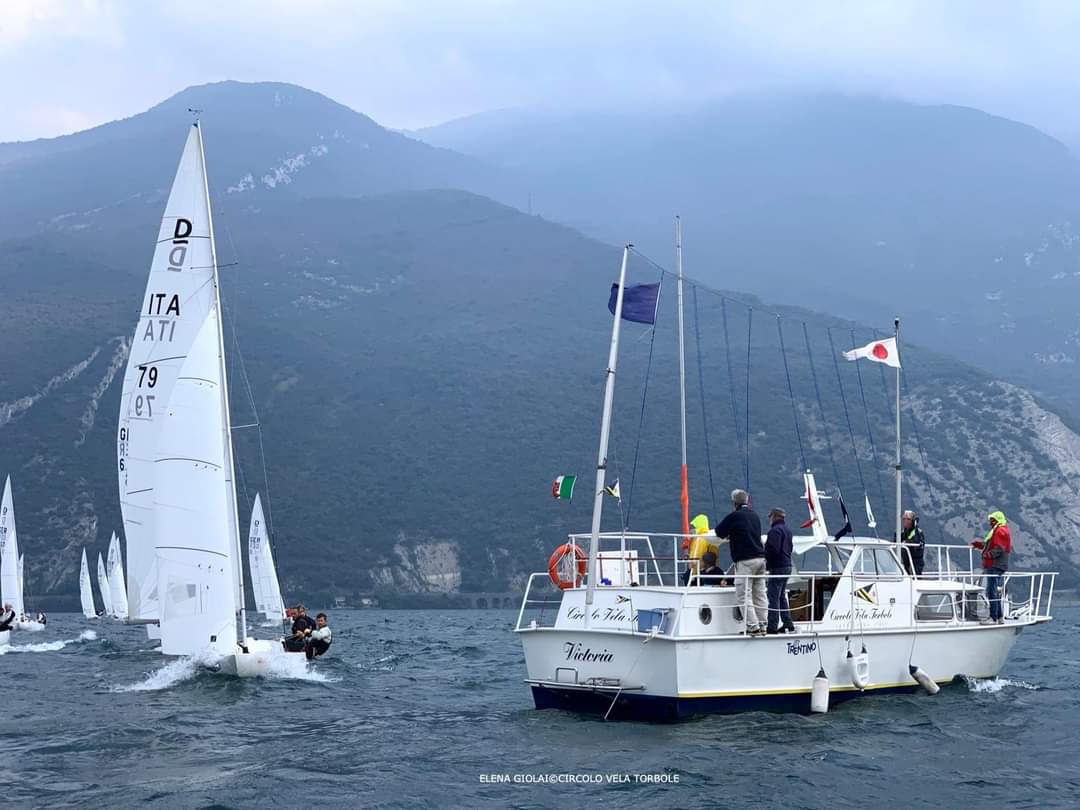 In closing I would like to thank both Christopher Nordhoff and Elena Giolai for allowing me to use their superb action photo’s, it helps me bring these “Blogs” to life and tell the full story.  Let’s all keep safe and go Dragon Sailing whenever possible, more reports to follow……