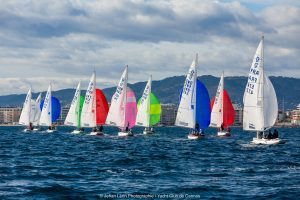 We kindly thank Stewart Reed FRA 412 for the following report….

The 3rd winter series in Cannes saw the weather God’s smiling, as conditions were near perfect allowing 6 races to be sailed over the 3 days. The Cote d’ Azur offered sunshine and blue waters for the 21 teams as they enjoyed 2 days of moderate breezes and one where the Mistral made a late arrival and helped clear a few cobwebs with gusts of 28 kts!  This coupled with the Yacht Club de Cannes legendary competence of the volunteers and race management, craning and friendly staff etc gave a weekend of excellent racing. 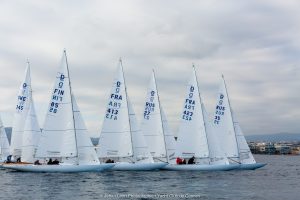 RUS 27 (middle of the photo)  eventually Won overall after 6 races.

For Day 1 the races were held in the East Bay and saw victories for both FIN 63 “Nenya” and RUS 35 “Sunflower”. Day 2 was different as racing was held in the West Bay with practically no wind to start with before a south westerly built throughout the day to eventually finish with a full Mistral. But not before RUS 27 helmed by Anatoly Loginov had secured a 1st and 2nd to set the tone for the final results.

That evening competitors celebrated with an excellent dinner at the YCC and a good time was had by all….. 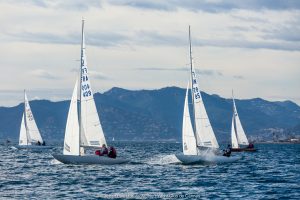 Day 3 saw the fleet back in the East Bay and two good races were completed before the wind died away to nothing, with the fleet then towed home.. RUS 98 and FIN 85 took the honours that day, but it was RUS 27 with Anatoly Loginov, Vadim Statsenko and Alexander Shalagin who did enough to win overall and take the Champagne at the end of a very enjoyable event.

The Cannes team are now putting the finishing touches to their preparations for the Cannes Grand Prix in early March… Quite apart from the Race Management, the Menu’s are being planned and the Wine is being chilled, the Beer is ordered and no doubt it will be another well organised event….

(Thanks again to Stewart Reed for the information and to JEHAN LERIN Photographie… for the excellent copyright photos…).