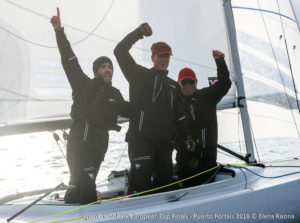 Hugo Stenbeck’s Sophie Racing, helmed by Bernardo Freitas and crewed by Martin Westerdahl and Lars Linger, has won the Dragon Grand Prix European Cup Finals after a day of intense competition on the Bay of Palma.

The opening day’s four qualifying fleet races had seen ten teams move forward into the final day of competition. Overnight leader Evgenii Braslavets of Italy received a bye into the Final and second placed Nicola Friesen of Germany a bye into the Semifinal, so at 13.30 on Saturday 16 November the remaining eight teams came to the line to contest the Quarterfinal and decide which five boats would join Friesen in the Semi. 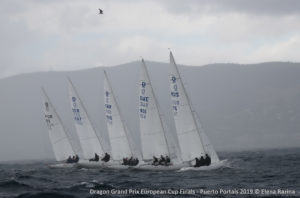 The Club de Regatas de Puerto Portal’s Race Committee, headed by Nino Schmueli, set a two lap windward leeward course with a 0.8 mile leg length on a bearing of 010 degrees under overcast skies and with around 6 knots of wind. Holland’s Pieter Heerema was over the line at the start taking him out of serious contention. At the first mark Russia’s Dmitry Samokhin led the fleet from Britain’s Grant Gordon, Sweden’s Martin Palsson and Portugal’s Pedro Andrade. With the wind direction and velocity constantly shifting the fleet compressed again on the first run. Up the second beat it was all change thanks to a shift, and at the second weather mark Gordon had taken a generous lead from Freitas with Palsson third, Andrade fourth and Samokhin fifth. On the final run this group held their positions to the line and moved forward to the Semifinal.

After the light airs of the Quarters, the first half of the Semifinal, which started only minutes later, could not have been more different as a heavy line squall rolled down off the Mallorcan mountains bringing 20 knots and heavy rain with it. Once again there was an individual recall and this time it was Freitas who had to recross the line. Fortunately he made his return quickly and then sailed a spectacular beat to round the first mark in second behind Samokhin with Friesen third. The squall went through as quickly as it arrived and with the wind back under ten knots Samokhin, Freitas and Friesen held their positions to the line. Palsson, Gordon and Andrade crossed the line in that order, but then turned for home having failed to qualify for the Finals. 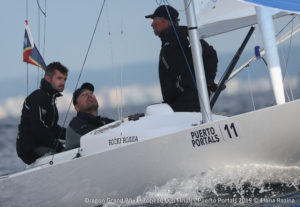 Four teams then lined up for one last showdown to decide the winner of the Dragon Grand Prix European Cup Finals; Italy’s Evgenii Braslavets sailing Bunker Prince with Sergey Pugachev and Sergey Timorkhov; Russia’s Dmitry Samokhin sailing Rocknrolla with Kasper Harsberg and Andrey Kirilyuk; Germany’s Nicola Friesen, sailing Khaleesi with Vincent Hoesch and Aleksey Bushuev; and the Swiss Sophie Racing team of Hugo Stenbeck, being helmed for this event by Bernardo Freitas after Stenbeck had been called away unexpectedly. Freitas and regular crew Martin Westerdahl were joined in the boat by Lars Linger who normally coaches the team. 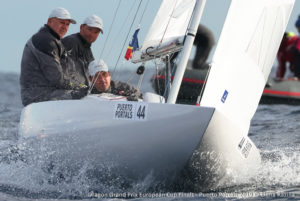 The Race Committee shortened both the start line and leg length and with around six knots from 020 degrees the race was underway. A pre-start incident saw Braslavets forced away from the line leaving him at a distinct disadvantage. As Freitas, Friesen and Samokhin tacked off to the right Braslavets took his only real option to recover and went left. Within minutes it was clear that he’d made a good choice and Samokhin tacked back to join him. At the first mark Freitas led Samokhin with Friesen third, but Braslavets was now right on their tail. The teams held these positions on the first run, but up the second beat the wind went light. Freitas and Braslavets opted for the left, Friesen and Samokhin went right and at the second weather mark it was Freitas who led comfortably with Braslavets second Samokhin third and Friesen fourth. While Freitas cruised to the line for victory Samokhin did all he could to pass Braslavets and the two boats virtually match raced into the finish, but Braslavets hung on for the silver medal by inches from Samokhin with Friesen fourth. 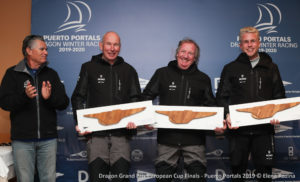 Ashore the fleet gathered to honour their champions. First Sweden’s Martin Palsson, Gustav Garedeback and Thomas Wallenfeldt were crowned Corinthian Champions. Four Corinthian teams had made the cut to race in the European Cup Finals, but Palsson was the only one to make it through to the last day and he was delighted with their result. “This has been a great week and a great season. We were so glad that we made it to the Semifinal. The week started out very hard for us but it ended up absolutely super!” 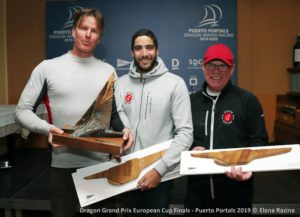 Finally Bernardo Freitas, Martin Westerdahl and Lars Linger stepped forward to loud applause to receive the spectacular new Dragon Grand Prix European Cup Finals Trophy, created by renowned Finnish sculptor and Dragon sailor Sami Salomaa and named Flow, as it depicts that moment in sailing when crew, boat, waves and wind come together in perfect harmony to create an exceptional performance. In accepting the trophy, Freitas paid tribute to his fellow competitors, his owner and his crew. “Thank you to everyone for being here to compete these finals. I want to say thank you to our owner and normally our helmsman Hugo [Stenbeck], who trusted us to race the boat in these two days. Unfortunately he had some personal issues to take care of so had to leave the regatta, but he wanted us to compete so here we are. I have to thank Martin and Lars for an outstanding job out there. We started a little bit rusty, but then there was no pressure on us so we just kept sailing and we are very happy with this win. So thank you very much everyone for a great regatta and we hope to see you again next season.”