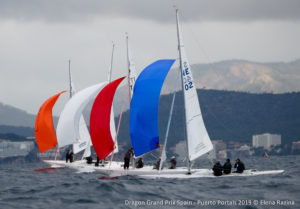 The third day of the Dragon Grand Prix Spain started with an AP flag due to heavy rain and an absence of wind. At noon, the Race Committee went out to check the conditions in the regatta area, and after almost an hour of waiting the Delta flag was raised and the fleet was allowed to leave the dock.

With the rain now gone the wind began to fill in from the North East and the first and only race of the day started in around 10 knots shortly after 2.30pm. The Race Committee set a windward-leeward five leg course with a 1.7 miles leg length at 045 degrees. As the fleet came towards the end of the first run the wind shifted to 055 degrees and Race Officer Nino Schmolli adjusted the weather mark in response, ensuring the fleet a second good beat. But as the boats started down the second run the wind began to drop and destabilise further, so the wise decision was made to stop the race at the gate rather than risk a potentially disastrous third beat.

Back ashore it was clear that the sailors were in full accord with this decision as they enjoyed a delightful evening at the regatta’s Gala Party hosted by the Club de Regatas Puerto Portals at the five start OD Port Portals Hotel. 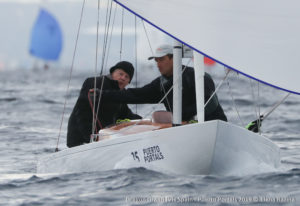 A total of five Dragon Grand Prix Spain races have now been completed and so the single discard has been introduced. The Dutch team aboard Troika, skippered by Pieter Heerema, maintain their overall lead after scoring a fifth place in today’s race and discarding a ninth.

The team of the day was Rocknrolla skippered by Russia’s Dmitry Samokhin, who made a magnificent start and got to the first mark 90 seconds ahead of his nearest competitors. Rocknrolla managed to keep her advantage throughout the rest of the race taking a comfortable first place from Portugal’s Pedro Rebelo de Andrade at the helm of Mars. With this second race win, Samokhin was able to discard a thirteenth and moves from fifth to second overall, just two points behind Heerema. 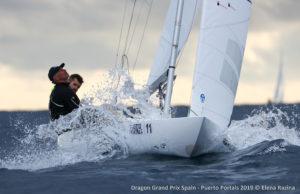 After racing Dmitry Samokhin acknowledged the difficult conditions the competitors and race committee faced today, saying; “We are very happy to win this race today. We knew it would be very challenging for everybody because the wind was medium to light and with a lot of clouds and rain. With a weather system we knew it was going to be unstable with a lot of shifts, the wind could increase, the wind could die, so we were expecting anything. But for us it was good, we took a good start where we wanted at the committee boat and then we were following the right shifts and had good boat speed and in the end we led the fleet all the way.”

Third place on the podium is now filled by the German team Desert Holly, helmed by Stephan Link, who finished the race third to move up the ranking from last night’s seventh. Fourth place on the water went to Klaus Diederichs of Britain at the helm of Fever who now holds 23 points overall, as does Italy’s Evgenii Braslavets aboard Bunker Prince who crossed the line in sixth. The tie is broken on count back in favour of Braslavets who takes fourth overall with Diederichs fifth. 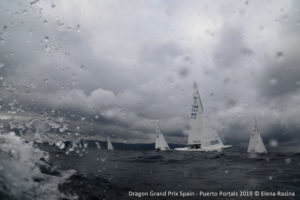 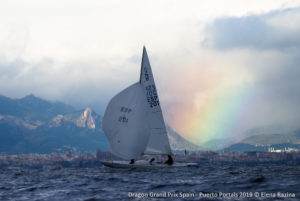 Once the overall results of the Dragon Grand Prix Series have been calculated, the top twenty teams will then be invited to move forward into the spectacular Dragon European Grand Prix Cup Final on Friday 15 and Saturday 16 November. Raced over two days this champion of champions decider will feature a knock out format, starting with a Qualifying Series of up to four races, followed by Quarter, Semi and Grand Final races. Going into the Grand Prix Cup Finals the scores are reset and with some of the best sailors on the planet competing we can look forward to a thrilling final showdown on the Bay of Palma.