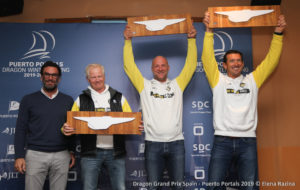 The Dragon Grand Prix Spain participants remained ashore on the final day of the regatta. Strong winds, above 30 knots, and a big swell with waves of more than two meters in the race area off Puerto Portals, made it impossible to run the last day of racing.

The Club de Regatas Puerto Portals Race Committee, led by IDA Race Officer Nino Schmueli, went afloat at 10.30am to check the weather conditions. At that time, gusts of more than 20 knots were already registering and the forecast anticipated a further increase in wind speed. The committee continued to monitor the situation but by 1.30pm it was clear conditions were not moderating and the Race Committee made the decision that no further racing would take place.

With five races completed over the preceding three days, the winner of the 2019 Dragon Grand Prix Spain was confirmed as Troika, skippered by Dutch Vendee Globe veteran Pieter Heerema with three time Dragon European Champion Lars Hendriksen of Denmark and Ukrainian 49er Olympian and World Champion George Leonchuk as crew. Troika was one of the favourite teams for the win thanks to their previous podium positions at the two preceding events of the Dragon Grand Prix Series. In the end Troika won with 15 net points, scoring a 4+(9)+3+3+5 in the first three days of the competition.

Second place was claimed by the Russian team Rocknrolla. Dmitry Samokhin and his crew of Kasper Harsberg from Denmark and three time Russian Olympian Andrey Kirilyuk achieved two impressive victories and a second place, but it was not enough and they ended the regatta just two points behind the winners. The podium was completed by the German Desert Holly team, helmed by Stephan Link and crewed by top Dragon and Star crew Frank Butzmann and H Boat and Dragon World Champion Michael Lipp. 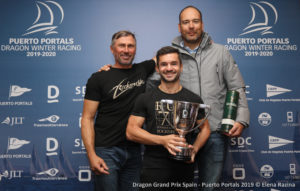 The Dragon Grand Prix Spain was the fourth and final regatta in the inaugural 2019 Dragon Grand Prix Series, which encompassed events in France, Portugal and Germany as well as Mallorca. Remarkably, after twenty four races sailed over four regattas, two teams were tied on equal points for the series. In a reversal of the Spanish Grand Prix result, once the tie breaker system had been applied, the winner of the 2019 Dragon Grand Prix Series was confirmed as Dmitry Samokhin and the Rocknrolla team, who received the spectacular new Standfast Trophy, which was presented by trophy donors Grant Gordon and Klaus Diederichs. Tied with Samokhin on seven points, but this time taking the second step on the podium was Pieter Heerema sailing Troika, while third place went to Portugal’s Pedro Rebelo de Andrade sailing Mars with Kai-Michael Schaper and Joshua Weber.

Reflecting on the success of the new Dragon Grand Prix Series and the 2019 season Dmitry Samokhin noted, “We’ve had a great season this year, by ‘we’ I mean all of us in the Dragon community. We’ve had a very successful year with the Grand Prix and the other big events and it was obviously a big year for the Dragon with our spectacular 90th Anniversary. I also want to say it’s been a priviledge to be able to sail and to be able to spend time after sailing with such a great community, with such great people. So I hope that next season will be another great year for all of us.” 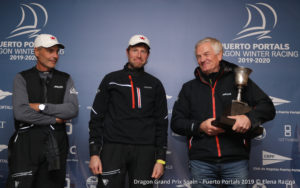 The first Corinthian crew, who were presented with the Lowell Phyllis Cup, was that of Karl-Gustav Lohr, sailing High Times with Jesper Bendix and Mads Hansen. Second Dragon Grand Prix Series Corinthian by just a single point was Philip Does, while the final step on the podium was filled by Martin Palsson.

The four Grand Prix Series regattas may be complete but for the top twenty teams in the overall ranking the competition will continue for two more days with the exciting new Dragon Grand Prix Europe Cup Finals. Tomorrow all twenty qualifiers will take part in up to four fleet races, after which the top ten ranking teams will move forward into the final day, when Quarter Final, Semi-Final and Grand Final knockout races will take place to decide the ultimate champion.

The forecast is for lighter conditions tomorrow and there is even the promise of some much needed sunshine. The quality and experience of the crews that will be competing in the European Cup Finals is truly extraordinary with Olympians, America’s Cup veterans, Round the World sailors and more World, Continental and National champions than you can shake a stick at. There’s a great sense of anticipation and excitement about the new format competition with its knockout format and the crews can’t wait for the final showdown to begin.

The Dragon Grand Prix European Cup Finals will be hosted by the Club de Regatas de Puerto Portals on Friday 15 and Saturday 16 November and further information about the event can be found at www.crpuertoportals.com