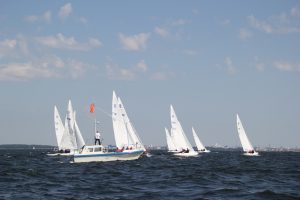 Finland, along with Sweden, Denmark & Estonia have all started to get back to club racing as the Covid 19 pandemic begins to show signs of subsiding in these well managed Countries. So I was delighted to receive this report from Rudy Jurg (FIN 89) along with some photo’s taken over the weekend provided by Race Officer Ted Grondahl. Rudy informed me “All of us have been affected by the Covid-19 crisis, but here in Finland we were able to organise the first weekend of the Helsinki Regatta program, racing on the same course area as the 2018 Gold Cup. This was due to quick and positive action by the government of Finland for reacting to the pandemic in a very clear and straight manner. We shut down early and as of today there are no patients in intensive care, plus the daily rate of new infections has been limited to between 0-20 for the last month”. 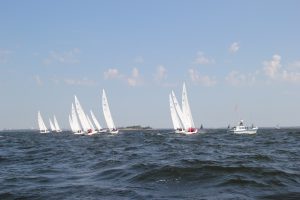 The Dragon Fleet in Finland has certainly benefited from hosting the recent Gold Cup with many experienced and top quality sailors joining the class. Two newcomers to the class, Erkki Heinonen (Soling 2000 Olympics) and Henri Virkkunen (6metre WC 2) both had top results on the opening day, along with the Olympic veteran’s Jouko Lindgren, Calle Lindfors & Tuomas Tenkanen in FIN 83. Meanwhile last year’s winner’s Peter Von Koskull in FIN 92 had a “rusty” day recording a 4 & 10. 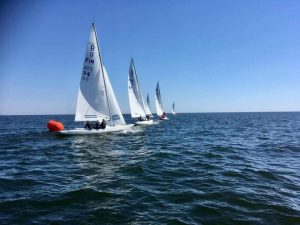 Perfect Conditions as teams round the top mark in Helsinki.

Rudy continues “During the night after the first day, the wind shifted around to the east increasing to 12-24kts and sailors knew this would make the sea conditions more difficult. The first race of the day was won by Peter Von Koskull FIN 92 who had a point to prove, they took a few good shifts to develop a nice lead and won by a substantial margin. Sadly FIN 64 Tom Jungell broke the forestay which ruled them out of contention, this left 3 boats in with a possibility to win overall. In the final race with the waves increasing FIN 83 were leading until the end of the second beat, but it was FIN 92 who took the lead and with superior downwind speed clinched the win and took the overall victory on count-back from FIN 83”. 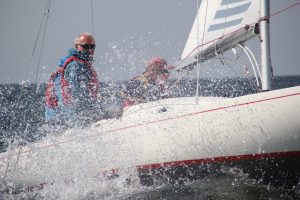 Superb Waves for the final race in Helsinki.

The next series will take place in Hanko starting next Friday…..