It is with great sadness that I am writing about of the recent death of Monique Hayles. I first met Monique in Hong Kong in 1972. By that time, as this photograph shows, she was already an accomplished Dragon crew. This photo shows her crewing on the foredeck of her father’s Dragon in Hong Kong in 1966. 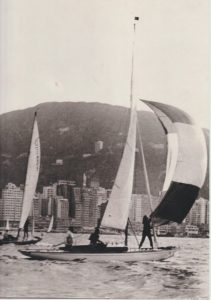 Once she had met Mike, she transferred her skills to his 505 and then to whatever boat he and their family were sailing at the time. In the meantime, Mike and I were increasingly sailing in the Dragon class together, culminating in joint ownership of various boats starting with Basilisk in 1987.

Monique was for Mike above all, but for us with the boat she was the quintessential loyal supporter. She came to many of the events, most notably the Worlds in Hobart in 2003 where local sales of oysters suddenly boomed. Then, as the four children had got older, she decided that she wanted to sail in the Dragon again. For the last fourteen years she and Mike have been indefatigable members of the Dragon circuit, particularly in France, and made many international friends through this. Astonishingly, she looked exactly as she did in the 1966 photo 50 years later!

Monique will be remembered by many Dragon sailors for her imperturbability and courage in unpromising situations and her delight in success. She was also great, convivial company on shore and a true, close friend. We will all miss her greatly.