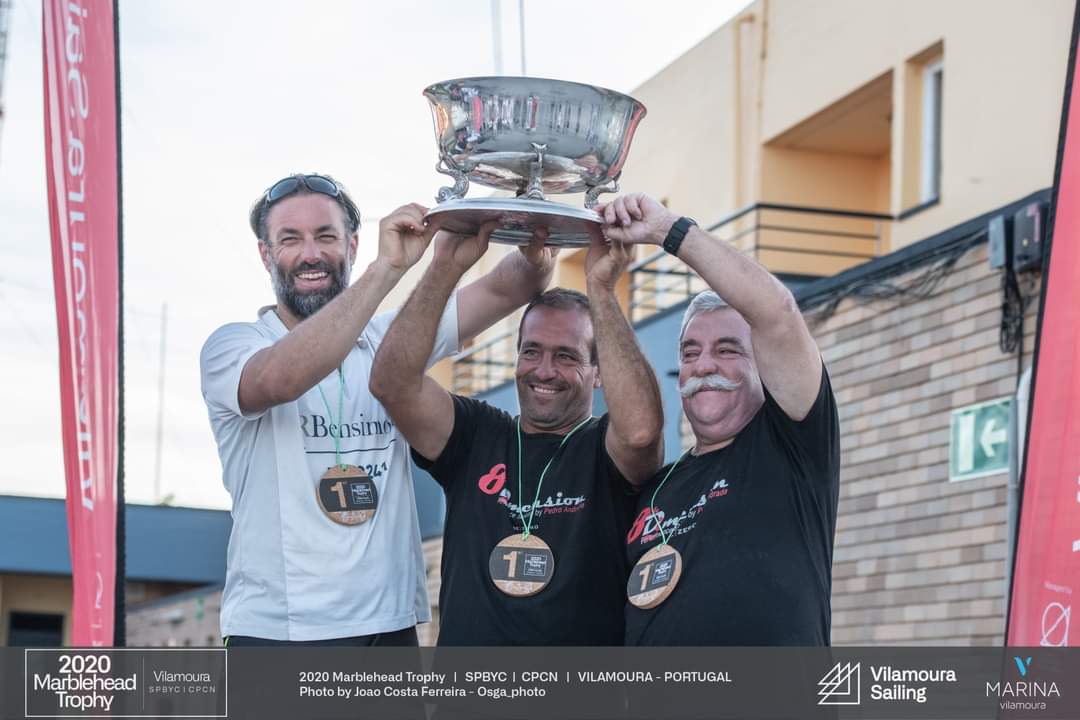 The 2020 Marblehead Trophy reached it’s climax yesterday with 5 teams still in with a chance of wining this coveted trophy on the final day of racing in the popular Portuguese Algarve venue of Vilamoura. With 4 races completed both Pedro Andrade and World Champion Andy Beadsworth were on equal points after discard, close behind were the current holders of the trophy Dmitry Samokhin (Herkules YC St Petersberg) and Alfonso Domingos (representing G.C.N.Faro). In 5th place, just a further point behind, was Gery Trentesaux (Yacht Club de France) who with his 4 man team were still very much in the game. 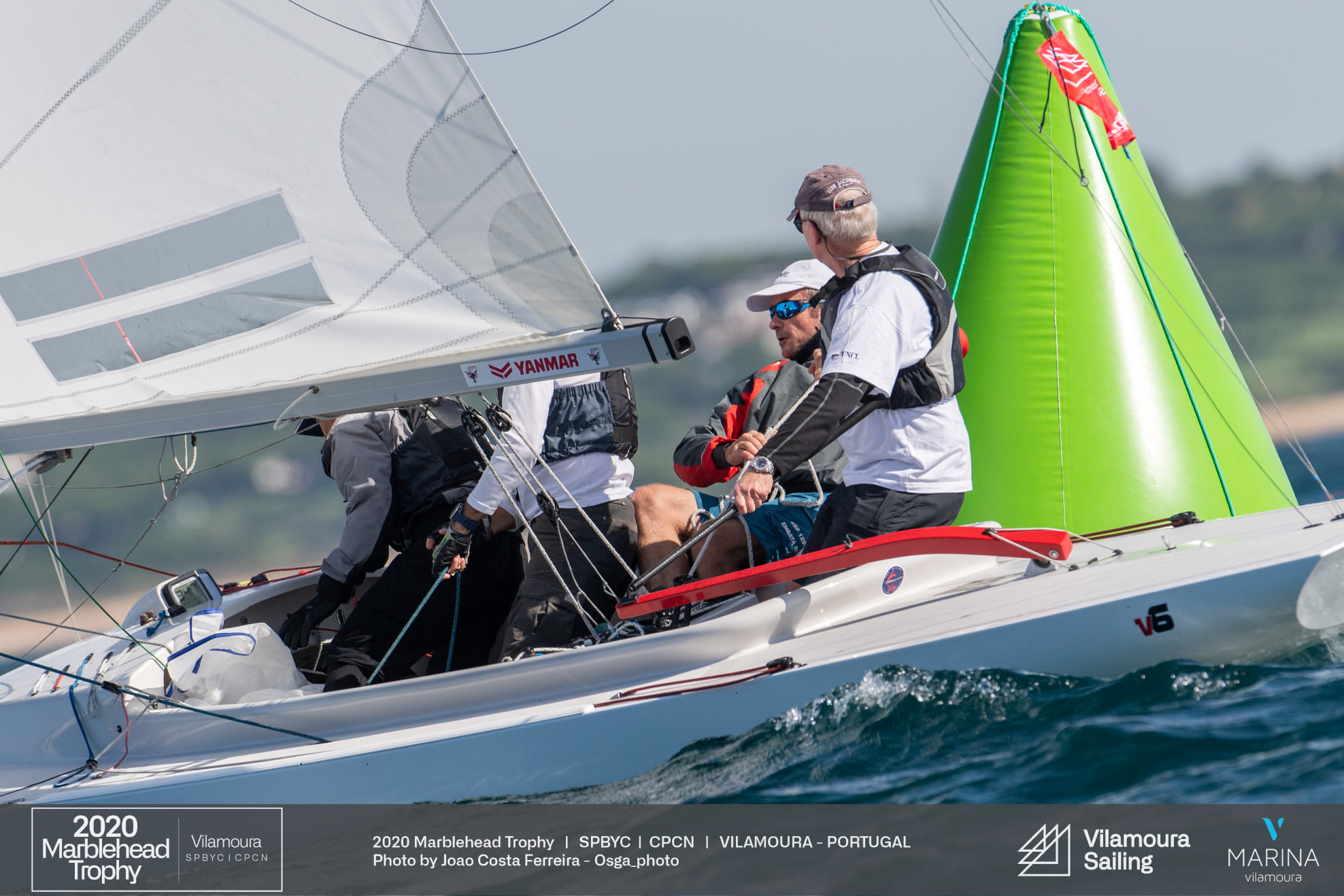 It had been a close fought battle over the first two days as these 5 teams featured predominately at the top of the leaderboard. Andy had won race 1, Gery race 2, Pedro race 3 and Dmitry race 4, so everything was changing race by race. One team in particular fairly new into the class was POR 68 “I’m sailing in Algarve”, the boat owned by experience sailor Filipe Silva and crewed by Olympic medalist Hugo Rocha had Alfonso Domingos (Twice Bacardi Cup Winner Star Class) on the helm! This new team recorded 2, 4, 4 and after discarding a 10th would certainly have pushed for a podium place if races 5 and 6 were sailed. But alas, the final day saw no wind, so at the last cut off time, Race Officer Nino Shmueli had to display AP over A. 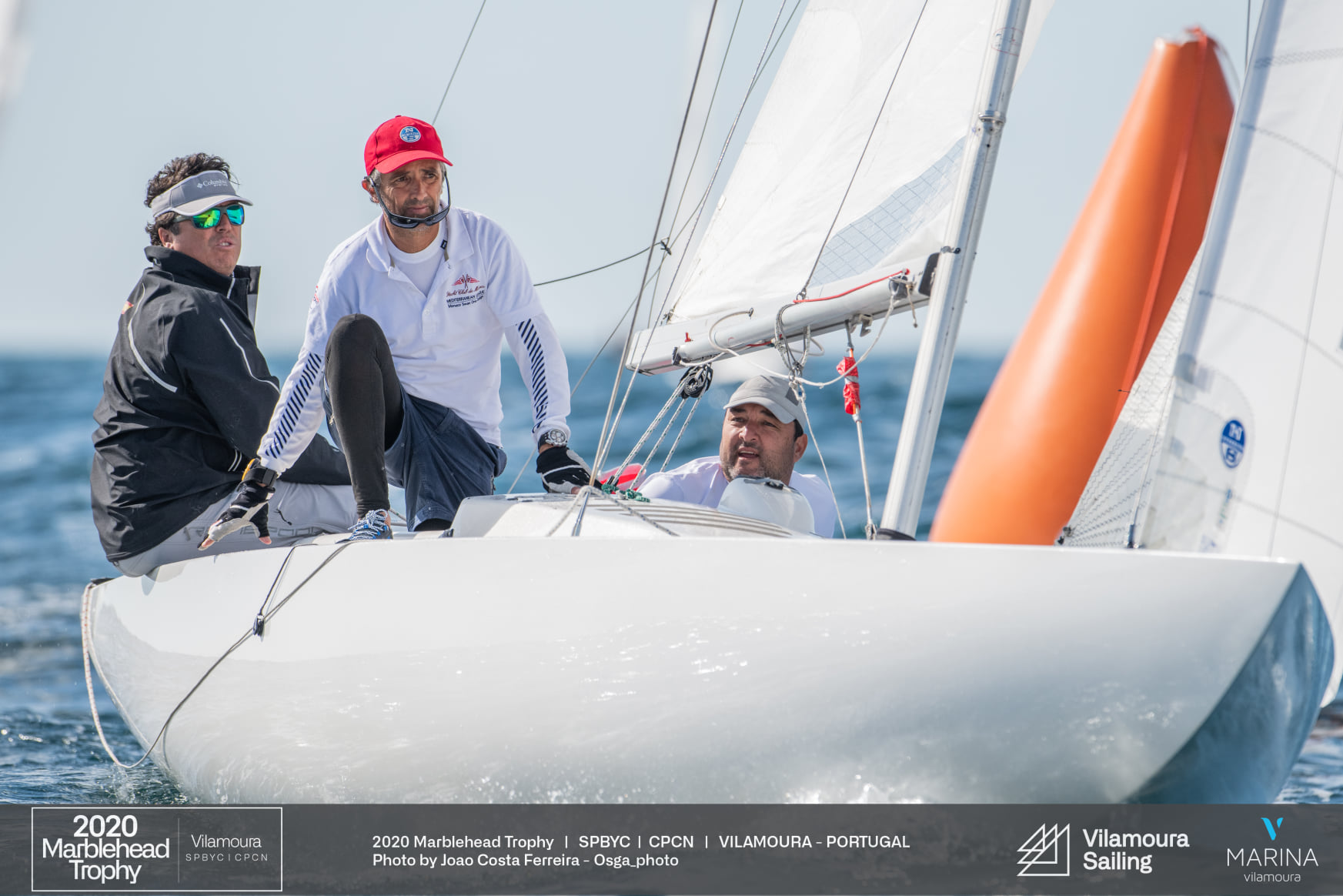 The final day’s cancellation was a huge disappointment to all 15 teams who were enjoying the competitive racing, the excellent sunshine and great camaraderie with fellow Dragon Sailors who once again, were able to take part in the sport they love. But the wind God’s do not always play fair and like in so many other venues Vilamoura had one of it’s exceptional days of no wind. However, Nino tells me the forecast looks a lot more promising for tomorrow which is the start of the last (and only) Grade 1 of the 2020 season, plus Finals. So let’s hope a full program will be completed during these difficult and scary times…. 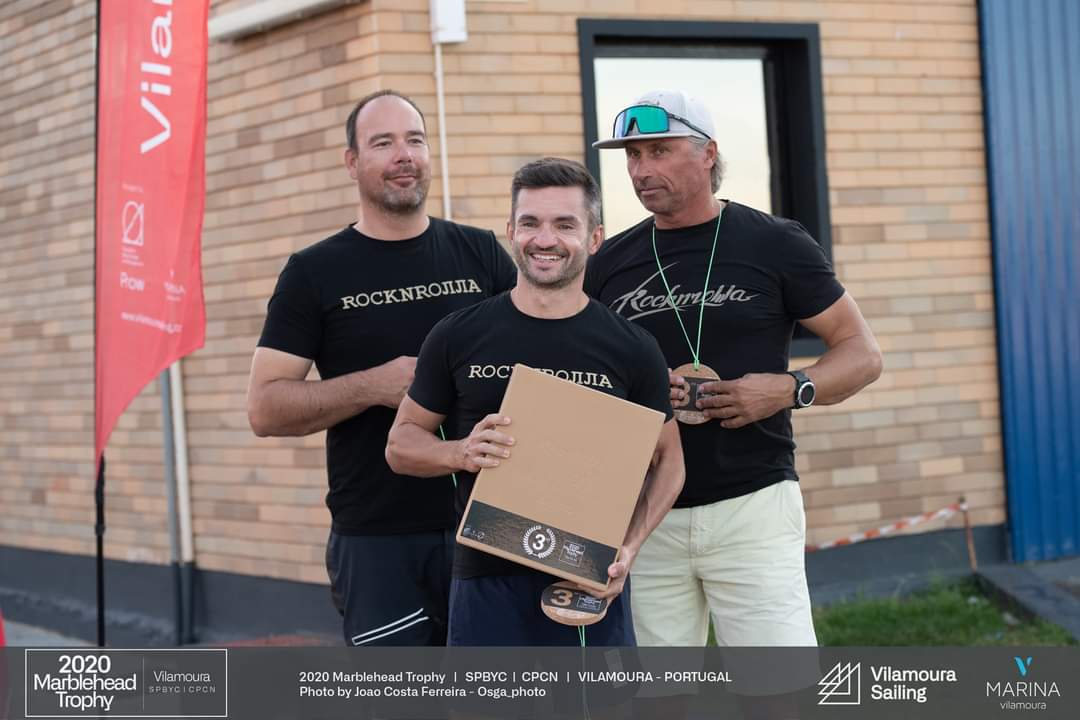 Last Year’s Winner’s RUS 76 had to settle for 3rd Overall.

So in the end the results stayed the same with Dmitry Samokhin and his team of Kasper Harsberg and Andrey Kirilyuk in 3rd position. The current World Champions TUR 1212 Andy Beadsworth, Simon Fry and Arda Baykal although on equal points with Pedro, but losing out on count back were 2nd Overall. 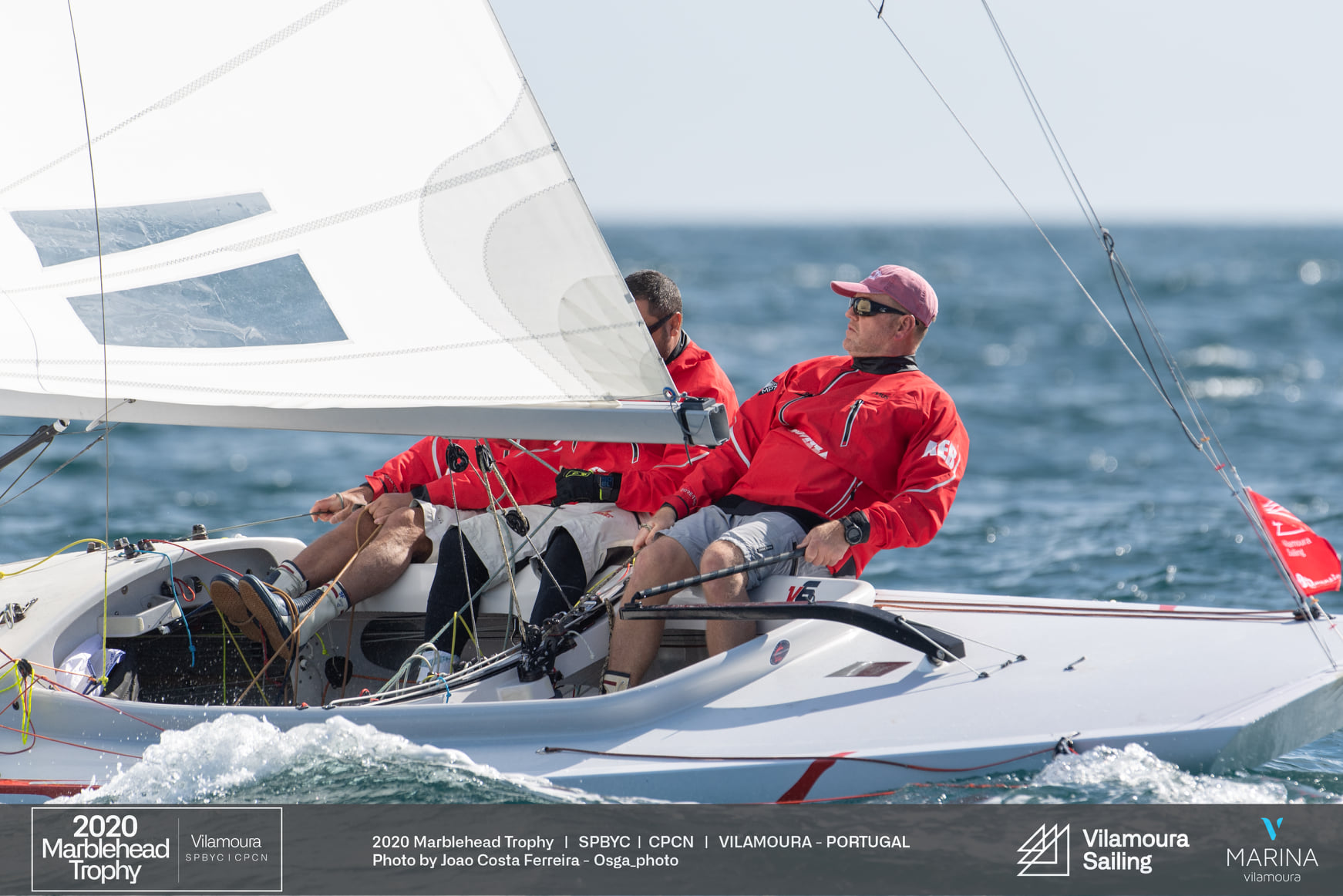 Then to the winner’s go the spoils….  The 2020 Marblehead Champions representing Club Nautico de Tavira are Pedro Rebelo de Andrade, Manuel Rocha and Charles Nankin. I asked Pedro to say a few words about his success but in the dizzy Portuguese heat and after copious amounts of Champagne quickly consumed I am not able to publish his thoughts and feelings  :-). One thing is for sure, Pedro is a great sailor and the work he continues to do alongside Vilamoura Sailing down in the Algarve to promote Dragon Sailing offers a rest bite from the severe restrictions the rest of Europe faces as we go into further lockdowns. Let’s all look forward to a better 2021 season, keep the faith and stay safe…. 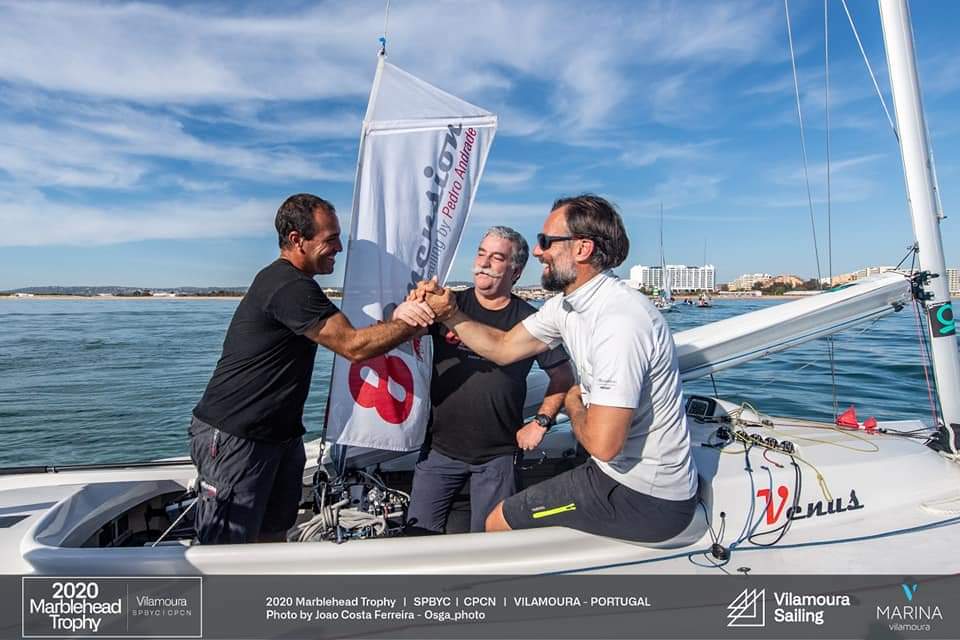