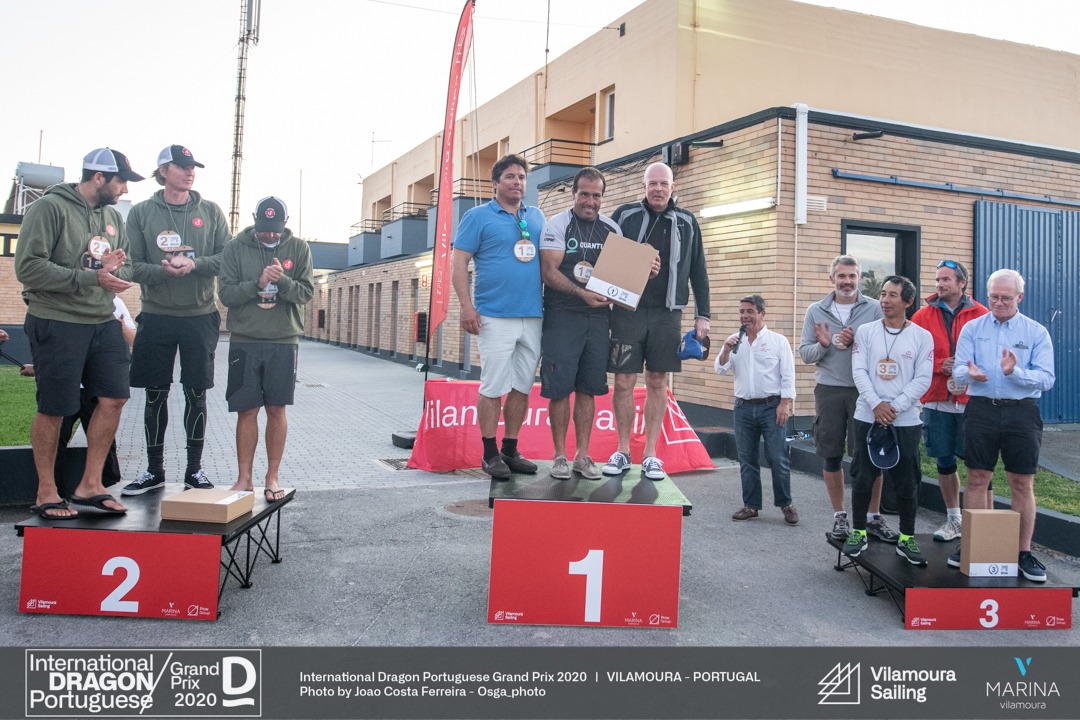 Pedro Andrade is top of the Podium in Finals.

Of the 14 boats who participated in the Portuguese Grand Prix which was won by SUI 311 “Sophie Racing” only 10 teams ventured out to participate in the IDA European Grand Prix Finals in Vilamoura. Although a small fleet it was extremely competitive and 3 excellent races were sailed to see who would lift the “Flow” (Sami Salomaa’s wonderful sculpture) Trophy during this severely depleted 2020 season.

In Race 1 it was SUI 318 “1 quick 1′ who certainly was quick, helmed by Wolf Waschkuhn who took line honours just ahead of POR 9 Pedro Andrade and SUI 311 Bernardo Freitas in 3rd. Wolf was enjoying the increased wind and bigger waves in Vilamoura and I’m sure he was first to thank his excellent crew Charles Nankin and Joao Vidinha for his much improved results. 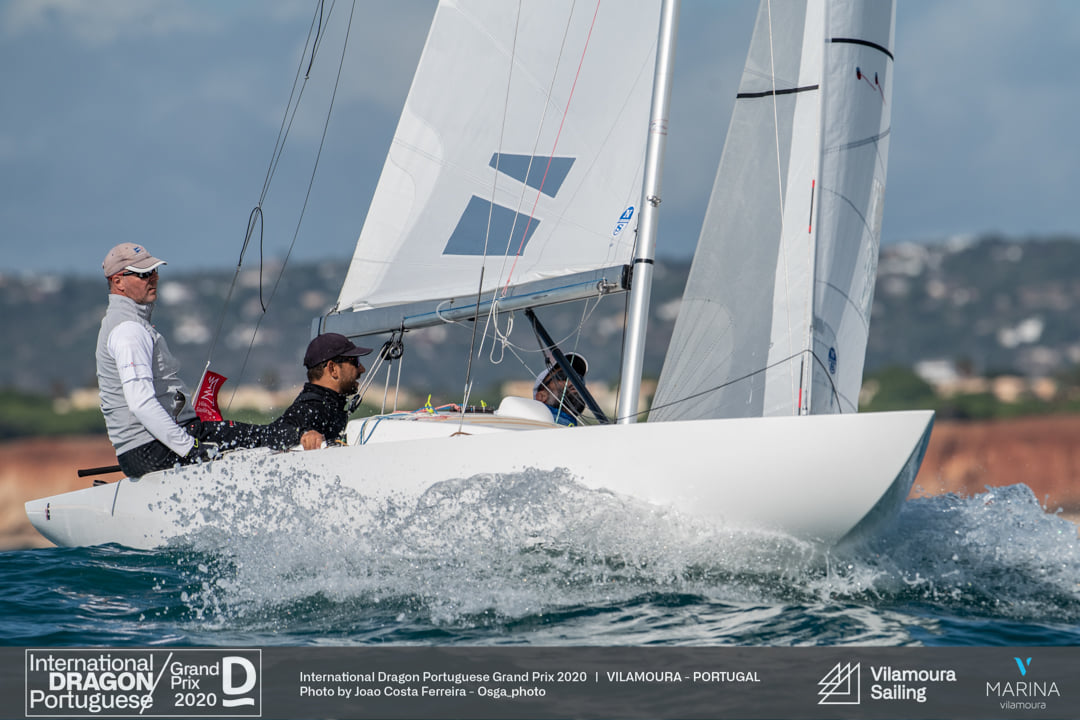 In the second race of the Finals it was the 4 man team of Gery Trentesaux FRA 428 “Bande a Part” who took the win just managing to keep the same two Portuguese Helms Pedro Andrade and Bernardo Freitas behind him. But with Pedro now on two 2nd’s and Bernardo counting two 3rd’s if gave Pedro a 2 point lead going into the final race.

At the start of race 3 both Pedro and Bernardo (last years winner) had eyes firmly focused on each other and what ensued was a tremendous tactical battle between these great sailors, both at the top of their game. Meanwhile Andy Beadsworth helming TUR 1212, who had not produced his normal high standard of sailing over the last two events, thought it was about time to give the fleet a small reminder why he is back to back World Champion! Andy crewed by Simon Fry and Arda Bayka won the race, whilst Pedro and Bernardo had their own private match race. 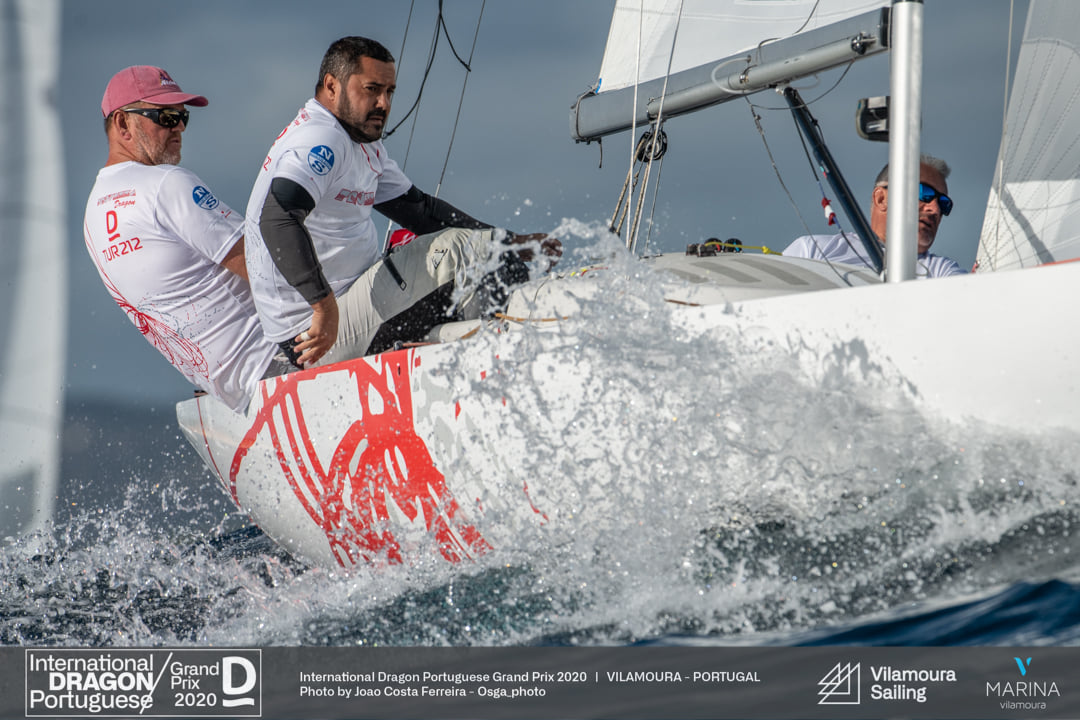 In the closing stages of the last race Pedro (with a 2 point lead) knew he had to finish within two boats of Bernardo and also not allow Gery Trentesaux into the overall reckoning… No easy task and all three boats finished close together just behind RUS 76. Bernardo took 3rd, Gery 4th and Pedro 5th it could not have been closer..  So overall Pedro and Bernardo finished on 9 and Gery on 10pts. But as Pedro was counting 2,2,5 to Bernardo’s 3,3,3. Pedro won on count back, how close is that? 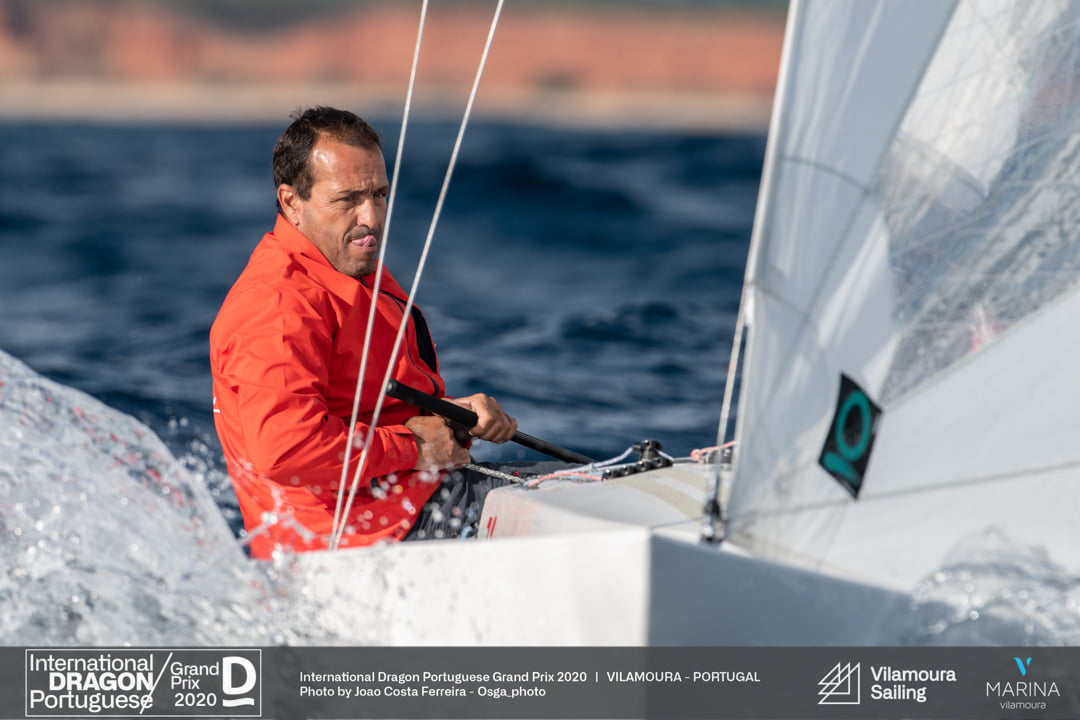 The Champion at work, Pedro Andrade winner of the Finals.

Pedro who was crewed by Afonso Domingos and former World Sailing President Kim Andersen told me “It is great to add this amazing trophy to my collection :-)” Pedro now holds the Gold Cup (won in 2019) the Marblehead Trophy (won 10 days ago), the Juan Carlos Trophy (won as crew), the Vilamoura Cup and the Brugse Zot Cup. Not a bad number of trophies. Trouble is he will start believing he is quite good now 🙂

In closing many congratulations to Nuno Reis and all his team at Vilamoura Sailing, in particular for the amazing photo’s seen on all my recent reports, for running these past events during the on going pandemic.  Also a special thanks to International Race Officer Nino Shmueli for his continued support of our Dragon Class, Nino told me “The level of the teams was very high and extremely competitive, the Race Committee worked hard to follow the wind shifts on each leg of the course to provide a high level of racing. We had two great events back to back in Vilamoura and I look forward to more Dragon Racing hopefully in 2021”

Thank you Nino, we all hope for that too….