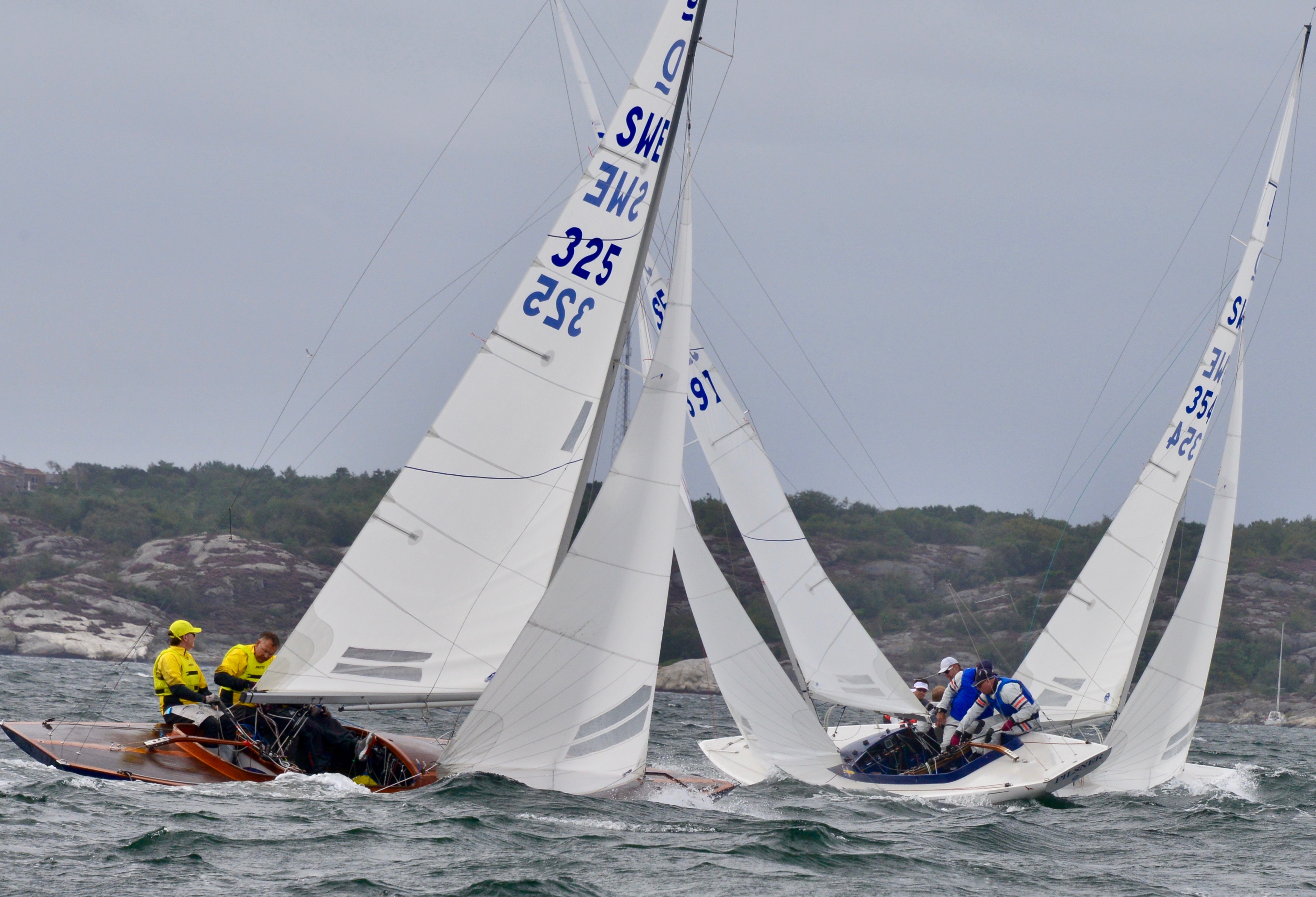 As a preview of the Gold Cup 2021 in Marstrand, this event held 22 – 23 August proved to be a huge success.
Nine races were completed at the Swedish Championship which was hosted by Marstrand Sailing Society (MSS). Despite the restrictions of Covid-19 MSS did a fantastic job by listening to the sailors, conveying information and conducting excellent races in difficult conditions. Despite the difficult conditions there were six qualifying races sailed and seven hours on the water before the participants could be divided into gold and silver groups in advance of Sunday’s final race.
On Sunday conditions were similar, and apart from a little less wind in the middle of the day (but still 8 m/s+) there were great sailing conditions out on the fjord of Marstrand. For Martin Pålsson, Peter Lindh and Thomas Wallenfeldt, it was a fight to the last to defend the Swedish Championship. Lars Hendriksen (crewed by Lars Hansen  and Kasper Harsberg) and Pålsson finished on the same points, and won the event by beating Pålsson in the Gold Fleet races. However, since the Swedish Championship is a closed event, the title went to Pålsson for the 5th time.
Overall event winner skipper Lars Hendriksen (DEN 138) said: “At the skippers meeting Saturday the race area was discussed in a nice way between the sailors and race management. It ended up with a simple vote. Swedish democracy at its best😁
So we raced in a well protected area behind Marstrand where there were no big waves and less wind.
Due to the Covid situation the fleet was split in two in order to be fewer than 50 people racing on the same course. Half the fleet raced on inner loop and the other half on a outer loop course. A very creative solution that made the Swedish Nationals possible. All social events were cancelled and we all kept distance 😇
Well done Marstrand Segelselskab👌🏻 Marstrand Segelselskab are already quite far advanced in the preparation of the 2021 Gold Cup. Please help them by making your pre-registration already so they have a good idea about the number of competitors to plan for. Personally I think we will be plus 100 dragons next year in Marstrand🏆”.
https://goldcup21.com/
Top five:1. DEN 138 Lars Hendriksen2. SWE 375 Martin Pålsson3. SWE 397 Henrik Jörhov4. SWE 345 Jan Secher5. SWE  341 Jonas Wahlström
Posted in Unclassified.
Share
Share